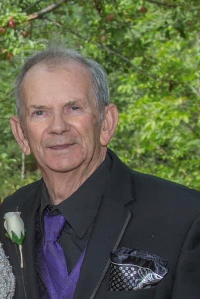 HOLLIS- Paul lost his battle with Alzheimer’s on April 24th, 2020. He was surrounded by his family, at home, and passed very peacefully. Paul was born March 11, 1936 in Houlton, Maine. He was the youngest child of Newell C. and Fern C. (Ellis) Drake
He attended schools in California, Texas and Maine
On August 20, 1966 he married Joan E. Gardiner. They would have celebrated 54 years of marriage this year.
They had two children, a son Rodney A. Drake, Hollis Center and a daughter, Becky A. Drake, also of Hollis Center
Although he didn’t have any formal training there wasn’t any task that he could not do. His career was varied. He owned his own Auto Body Repair Shop; he spent many years as a salesman and won many top salesman awards as a representative of Saladmaster Cookware; he loved working in his woodlot with the trees. His greatest challenge was when he devoted his full time to the care of his son who was severely injured at the age of 13.He always said even after he retired “I just feel better if I accomplish one thing each day”.
Besides his wife and two children he is survived by his daughter in law Samantha Drake and grandchildren Lexi, Konnor and Coli. Many nieces and nephews also survive him. He was predeceased by his mother and father, four sisters (Virginia, Lois, Marion, and Leona) and one brother (Donald). He will be sadly missed by his family.
There will be no funeral services or graveside services.
Online condolence messages can be submitted at the Chad E. Poitras Cremation and Funeral Service website, www.mainefuneral.com
Anyone who wishes to remember Paul can send a donation to the Alzheimer’s Association or a charity of their choice.