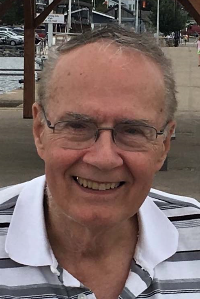 Jerry was born on November 5, 1937 in Milwaukee, WI, to Albert and Cecelia (Jensen) Holtenhoff. He spent his early years growing up in Chicago and Milwaukee. After earning a bachelor’s degree from Marquette University, Jerry went on to the University of North Carolina at Chapel Hill to receive a master’s degree in Urban Planning. After returning to Wisconsin, Jerry began a 25-year career in city planning with the City of Milwaukee, City of Portland, Maine and later, the City of Marquette, Michigan. It was during his time on the shores of Lake Superior where Jerry’s career and life took a delightful turn.

With a reaffirmation of his faith, Jerry responded to a calling to use his talents in a more personal way. He went back to school, completing a master’s degree in Theology from the Franciscan University of Steubenville in Ohio. From there, Jerry went on to live his faith and become the coordinator of the religious education programs at the Sacred Heart of Jesus Parish in Webster, MA, a position he held for over 20 years.

Always curious and open-minded, Jerry had many interests. He had a savant-like knowledge of geography and was always quick to draw maps or pepper friends and family with obscure geographical facts. He enjoyed hiking the White Mountains and held a lifelong affinity for The Great Lakes, especially summer visits to Georgian Bay with his family.

However, his favorite pastime was music, especially listening and dancing to polka. In Milwaukee, he founded the local polka band ‘The Metropoles’ where he utilized his conversational German and Polish language skills as a singer / drummer. Later, as a weekend DJ in Portland, he created the popular ‘Rhythms Around the World’ program playing Greek, Irish, Polish, among other cultural music. His DJ skills were also on display in Kewaunee County, Wisconsin where the majority of his listeners were cows who (studies say) produced more milk while listening to polka music.

Jerry was purposeful in his pursuits, humble in his accomplishments, and modest in his living. He was always ‘at the ready’ to engage in deep discussion about life’s larger matters as easily as he was at slipping into light and playful banter, enjoying a good heart-felt laugh with family and friends.

He leaves a daughter, Krisan Holtenhoff of Portland, Maine; a son, Marc Holtenhoff and his wife Karen of Toronto, Ontario; and 3 grandchildren.

A memorial Mass will be held at a later date. In lieu of flowers, donations in his name may be made to the Alzheimer's Association, 225 N. Michigan Ave. Floor 17 Chicago, IL 60601.