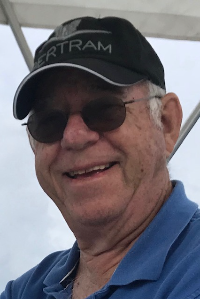 WILLIAM FRANKLIN DIXON 1937 - 2020
FALMOUTH - Frank (‘Lucky’) Dixon, 82, of Falmouth, Maine and Lighthouse Point, Florida, passed away peacefully on Monday April 20, 2020. Born in Hendersonville, North Carolina, he was the son of the Dr. Guy Erastus Dixon and Jennie Tuckkoy Edney Dixon, and one of 8 siblings.
He was known for his warm hospitality, ability to tell a good story, willingness to help others, and his philosophy that if someone else can do ‘a thing’ then he could learn to do it too. This philosophy made him a lifelong self-taught learner, mastering many skills ranging from salesmanship to auto body work to playing drums and harmonica. As a teenager he helped his brother design the first Panelfold door, which went on to become an international business. As a young adult he jammed alongside Elvis Presley and had his own small band. As a senior citizen he marveled at the technology changes he saw throughout his life from a childhood where cars were rare, money scarce, and chores plentiful to today’s era of spaceflight, cell phones, and the internet.
Frank was dedicated to his family and served in many capacities over the years, such as: a Navy man serving on the USS Nautilus submarine and anti-submarine combat aircrew, District Deputy Grand Master for the Masonic Temple, successful business owner of the independent Insurance agency Dixon Associates, volunteer Falmouth Fire Firefighter, Captain Frank in his Florida boating club. He enjoyed his hobbies of playing the harmonica, antique cars, boating, and spending good times with family and friends.
He raised three daughters together with his first wife, Aline Gagnon Dixon, and a son with his second wife Pamela Mayo Dixon. He worked as a salesman for the Singer Sewing machine company in four southern states for a number of years before moving the family to Maine and becoming an Allstate (and then Nationwide) insurance agent. He later started a successful independent insurance agency, Dixon Associates.
In addition to his parents, he was predeceased in death by his brothers, Guy and Thomas and his sisters Dessie, May, Gladys, and Jane.
He is survived by his four children Kim Pruitt (Andre), Jane Bopp (Fred), Denise Melcher (Paul), William Dixon; seven grandchildren that he thought the world of - Monica, Erin, Ian, William, Nick, Elliot, and Jillian; his sister Ruth; and many extended family members. Due to the COVID-19 pandemic, a celebration of life will be planned later.
Online condolelnce messages can be submitted at the Chad E. Poitras Cremation and Funeral Service website, www.mainefuneral.com
In lieu of flowers, donations can be made in memory of William Franklin Dixon to St. Jude Children’s Hospital (http://giftfunds.stjude.org/DixonStrong).