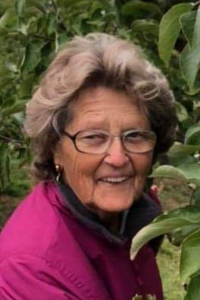 Limerick - Barbara F. Gilpatrick, 81, of Limerick died at her home on April 18, 2020 after a long illness. She was born on March 18, 1939 a daughter of Raymond and Emelene (Gammon) Harmon and was educated in local schools. She married Floyd Gilpatrick on December 8, 1957.

Barbara was always a hard worker and worked at several local manufacturing companies in her younger years. Later on she worked as a caregiver for Holy Innocence (Catholic Charities) in Portland for many years. She was also a "foster" grandparent at the Line Elementary school for several years.

Barbara was also very involved with several local agricultural fairs. She was the livestock secretary at Fryeburg Fair for several years. She was a life member and wore many hats for the Ossipee Valley Fair over the years. She was also a member of the Waterford Fair, and a stockholder of the Acton Fair. She was a member of the South Limington Free Baptist Church. She enjoyed doing puzzles, and had a great love for animals, especially cattle and horses. Above all she loved her kids, grandkids and all of her extended family and many friends.

A memorial service will be held later when gatherings are appropriate at the South Limington Free Baptist Church. Arrangements are by Poitras, Neal and York Funeral Home. Online condolences may be shared at: www.mainefuneral.com