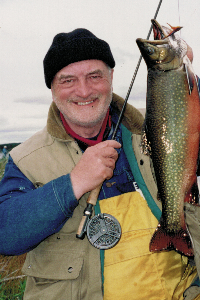 Mr. William P. Twomey (Bill), a lifelong resident of Medford and beloved husband of the late Sandra A. (Sheehan) Twomey, passed away at his home on Tuesday morning, April 14, 2020. He was 90 years old.

Born in Medford, Massachusetts, on March 28, 1930, he was the beloved son of the late Thomas L. and Margaret G. (Flynn) Twomey. Bill was a graduate of the Christopher Columbus High School. He had a career in the insurance industry that spanned 45 years in which he specialized in excess and surplus lines business.He held senior executive positions at Maurice H. Saval,Inc./Canadian Universal Insurance Company and thereafter formed his own company PWN Underwriting Managers, Inc. Bill's true passion was the the outdoors. He was an avid fisherman and filmmaker and formed "Northern Adventures," a company which produced documentaries that chronicled wilderness fishing adventures in Northern Quebec and Labrador. Bill was a member of the New England Outdoor Writers Association, Inc. and a veteran of the Korean War. He was also a communicant of St. Joseph Church in Medford. He will be dearly missed.

Bill is survived by his loving son and daughter-in-law; Thomas L. and his wife Kathleen R. Twomey of Medford, sister; Noreen Rodgers of Lexington, Kentucky and many nieces and nephews. He was also the brother of the late Atty. John J. Twomey, Margaret Kirwan and Diane Pearson.

A graveside service will be held in the Oak Grove Cemetery, 1230 Playstead Road, Medford on Friday, April 17, 2020, at 12:30 PM. Donations in Bill’s memory may be made to The Community Family, Inc., an adult daycare for people suffering from memory impairment (Buddy Cohen Center). Arrangements have been entrusted to the Beals-Geake-Magliozzi Funeral Home of Medford. For additional information, please visit, www.magliozzifuneralhome.com.