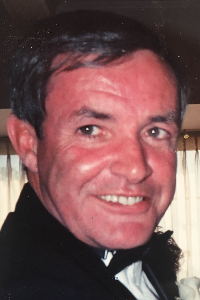 PUNCHIE'S FUNERAL MASS HAS BEEN SCHEDULED FOR SATURDAY, SEPTEMBER 19, 2020 AT 10 A.M. IN ST. FRANCIS DE SALES CHURCH, 313 BUNKER HILL ST. CHARLESTOWN. HIS BURIAL WILL TAKE PLACE AT OAK GROVE CEMETERY IN MEDFORD FOLLOWING THE MASS. RELATIVES AND FRIENDS ARE INVITED. (FACIAL COVERINGS ARE REQUIRED INSIDE CHURCH.)

Richard T. "Punchie" McLaughlin, a longtime resident of Charlestown, entered into eternal life on Sunday, April 12, 2020 at the Veterans Administration Medical Center in West Roxbury. He was 72 years of age.

Punchie was born in Boston on October 27, 1947, a son of the late John A. McLaughlin and Mary J. (Harrington) McLaughlin. He grew up in Charlestown where he was educated in the Boston Public School system and graduated from Charlestown High School in 1965. Punchie enlisted into the United States Army on March 29, 1968 and served his country faithfully and with courage during the Vietnam Conflict. He was honorably discharged on December 29, 1970 with the rank of Specialist. Punchie worked for many years as a Letter Carrier for the United States Postal Service. He was a member of the Bunker Hill Council # 62, Knights of Columbus, Medford/Revere V.F.W. Post and the American Legion Post in Malden and Florida.

DUE TO THE COVID-19 PANDEMIC, PUNCHIE'S FUNERAL SERVICES AND BURIAL WILL BE PRIVATE.

A celebration of Punchie's life will be announced at a later date.