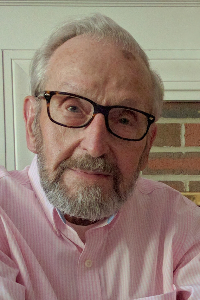 If you have ever enjoyed the movie Oklahoma!, tapped your foot to a bouncy polka, or looked up at the night sky, then you’ve met Joseph Kaczyk. Joe passed away Friday, April 10, in his home in Centerville, MA at 92 years old. From his involvement in technological achievements to quiet moments with those close to him, Joe made the most of a long, full life and left his imprint on family, friends, and strangers alike.
Joseph Frank Kaczyk was born in 1928 to Mary (Sokolowski) and John Kaczyk in Gardner, MA. He was the fourth of five sons in a large family of Polish Catholic immigrants.
After graduating from South High School in Worcester, Joe served in the U.S. Army during World War II. While home on leave, he went on a blind date and was surprised to see it was a girl he already had his eye on, Therese “Terry” Makowiecki. Joe and Terry married in 1950 and would go on to have five children and spend the rest of their lives together.
Joe worked for American Optical as an engineer on the Todd-AO project, designing cameras and projectors for a new widescreen 70mm film format system, which became a new standard in the motion picture industry. He often recalled with pride working on the first few films that employed this new technology including Oklahoma!, Around the World in 80 Days, and South Pacific. But what he talked about most passionately was the work he later did for the space program. Joe was an optical engineer at Itek and worked on the team that created the optical bar panoramic camera for NASA’s Apollo and Viking programs and the mirror and optical systems for NASA’s Hubble Space Telescope, which is still in operation today.
In his free time, Joe was a leader in the Boy Scouts and Explorers, a member of the Polish American Veterans of Worcester, a skilled carpenter, and an avid photographer. In retirement, he embraced his passion for polka music. For years, Joe and Terry hosted a weekly polka radio show on WCUW, which gained a dedicated following in the Polish community. After moving to Cape Cod, he took a part-time job at Enterprise in Hyannis. In his 80s and 90s, Joe worked countless hours on his computer digitizing his vast lifetime collection of photos and recordings to share with his family.
As impressive as his career and accomplishments were, those that knew Joe best will remember him far more for his dedication, love, and friendship with his wife Terry and how he taught and guided his children and grandchildren throughout their lives. He will be remembered for the devilish twinkle in his eye, his inventive ingenuity, and his endless generosity. And when we look up at the moon and stars, watch an old movie, or hear a polka, we will think of him and those special moments.
He leaves behind his wife, Therese “Terry” (Makowiecki) Kaczyk of Centerville, and his five children, Jo Ann Bauer and her husband Ted of Leicester, Katherine Kaczyk of Centerville, Joe Kaczyk and his wife Meg of Port Townsend, WA, C. Monica Kaczyk and her husband Paul of Barnard, VT, and Donna Goodchild and her husband Bruce of Sheffield. He is also survived by eight grandchildren and many nieces and nephews.
There will be a private burial in Worcester County Memorial Park, Paxton. Due to the current public health crisis and social gathering restrictions, a celebration of life mass will be held at a later date to be announced by the family. HENRY-DIRSA FUNERAL HOME, 33 Ward St. is assisting the family. Please leave a sentiment or note of condolence to the family at www.worcesterfuneral.com