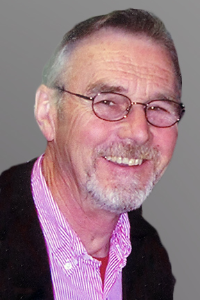 Dennis was born in Canton, OH, April 2,1942, the son of Jefferson Livingston and Jean (McDermott) Livingston. He moved to, and grew up in Winnisquam, NH, graduating from Winnisquam Regional High School in1960. He received his Bachelor’s Degree in Psychology, from the University of New Hampshire.

Dennis served in the Unites States Army National Guard BTRYC 3rd BN 197th ARTY. In the Army he was SP4 and worked in supplies and motor section and served in the Vietnam War from 1968-1969.
Dennis worked as a plant manager at Oak Laminates in Franklin, NH, and was then transferred to open a new plant in California where he met his wife. Dennis also worked in sales at Electro Circuits in Laconia for many years, McGreevy’s Automotive, and finished his semi-retirement at Home Depot in Tilton, working in their gardening center.

Dennis loved to watch NASCAR races and enjoyed spending summers in Wells Beach, Maine, with his wife sitting on the beach, line-dancing, gardening, reading, hunting, woodworking and building things including his beloved Log Cabin. Dennis especially loved his dogs and reminisced about them often, his favorite breed being the schnauzer.

A special thank you to the people at Tilton Veterans Home for their loving care and support during his final days.

Dennis is survived by his wife of 43 years, Pamela (Coffin) Livingston; his daughter Stacie (Livingston) Mosher of Gilmanton and her husband Ryan Mosher and their three sons; Tyler, Brody and Beckett; Stepson, Chad Dion, his significant other Laura Flora, and son Trevor of Gilford; his brother, Brett and wife Robin Livingston; sister, Brynne Livingston; brother-in-law, Gordon “Cappy” Bradley and his wife Marilyn; sisters-in-law Marge Livingston of Ohio and Penny Wilson of Gilford; along with many other loving nieces and nephews. He also had a predeceased stepdaughter, Lisa Mallory, and her son Sean Mallory and brother Jeff Livingston. Dennis was a loving father, husband, grandfather, and friend to everyone.

Dennis will be buried at the New Hampshire State Veterans Cemetery, Boscawen, NH, with a memorial service held at a later date.

Wilkinson-Beane-Simoneau-Paquette Funeral Home & Cremation Services, 164 Pleasant Street is assisting the family with the arrangements. For more information and to view an online memorial go to www.wilkinsonbeane.com