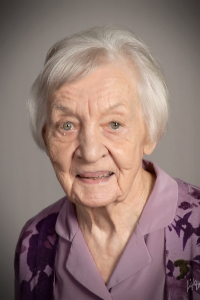 Kathryn Eva Fagan went home to Jesus on April 4, 2020, at age 96, after several months of declining health due to complications of Parkinson’s disease and heart failure. Kathryn was born in Versailles, Pennsylvania, on December 17,1923, to Andro and Ljuba Ferketic. Her parents died when she was twelve and she and her two sisters, Helen and Betty, went to live with their father’s brother, Paul, and his family. After graduating from high school, Kathryn worked in the B & O passenger office in Pittsburgh where she met her future husband, Robert D. Fagan (Bob). They were married on April 8, 1950. Kathryn continued to work at the B & O until the birth of her daughter, Kathy, followed two years later by her son, Robert. In 1963, the family moved to Baltimore and lived in Loch Raven Village. Kathryn became active in her children’s school activities and in her church. She was a Sunday School and Vacation Bible School teacher for many years and served for several years as the President of the Women’s Association at Babcock and Loch Raven Presbyterian churches. She remained an active member of Loch Raven Presbyterian until her health made it impossible to attend.

Kathryn was preceded in death by her husband who passed away in 2002. Kathryn is survived by daughter Kathleen (Kathy) and son, Robert P. (Bob) Fagan, sisters Helen Ferketic and Elizabeth (Betty) Oeler, nieces Marion Kummer and Karla Oeler and many cousins and friends.