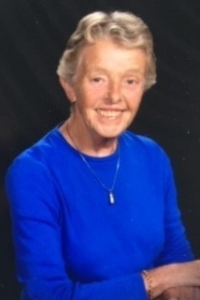 Dorothy Brownell Everett Nichols (Dorrie), 86, of Little Compton passed away on April 1, 2020 from complications of the coronavirus (COVID-19). Dorrie was born in Providence, RI to Dorothy Drowne Brownell and Dexter Brownell on July 14, 1933. She, along with her sister, Elizabeth (Betty), was raised in East Providence and later Middletown, RI and spent time each summer in Little Compton, RI.

Dorrie graduated from East Providence High School and Tufts University with a Bachelor’s Degree in Physical Therapy. After college, she married Samuel A. Everett and they raised four children in a loving home on Providence’s East Side where Dorrie was active in the congregation at St. Martin’s Church. Some years after Sam’s sudden passing in 1975, Dorrie married Earl B. Nichols and she and Earl enjoyed 26 memorable years together in Providence, Rehoboth, MA and Little Compton, up to Earl’s passing in 2006. In later years, Dorrie lived in Little Compton where she was a member of the St Andrews by-the-Sea parish.

In addition to raising a family and practicing physical therapy, Dorrie was an active gardener with a keen interest in roses, having learned to hybridize her family’s Brownell Sub-Zero roses from a young age. In her later years, Dorrie was an active presenter at garden clubs across the region, highlighting the story of her grandfather’s shift from practicing law to the development of roses that could withstand cold New England winters and her father’s work in continuing the Brownell rose business. The Brownells shipped more than 50 varieties of hybridized roses from Little Compton to gardens across the country, including numerous public gardens like Roger Williams Park in Providence and the New York Botanical Garden.

Dorrie’s life was largely defined by family and the ocean. She spent endless days at the beach from the youngest age, boated with her parents, and sailed with Sam and their children from Sakonnet Harbor. Dorrie also enjoyed golf and was a member of the Agawam Hunt Club and the Sakonnet Golf Club.

Dorrie’s love of going to the beach never declined. In later years, every day was by the water, both at Sakonnet Point and at the Dunes Club with the Nichols family. At age 80, Dorrie broke her neck and was admitted to Rhode Island Hospital. A caring, but perhaps patronizing, nurse stopped by Dorrie’s bed and asked loudly, “Honey, how did you hurt yourself?” Dorrie’s two-worded response, said without exaggeration but perhaps with an element of annoyance, was: “body surfing.” Dorrie soon had many visits from hospital staff intrigued by the 80-year-old body surfer.

Given the limitations on gatherings at this time due to the coronavirus, burial for immediate family at Swan Point Cemetery, Providence and a celebration of life will be held later in the year. In lieu of flowers, donations may be made to St. Andrews by the Sea, 182 Willow Ave., Little Compton, RI, 02837 or Friends of the Sakonnet Lighthouse, PO Box 154, Little Compton, 02837.