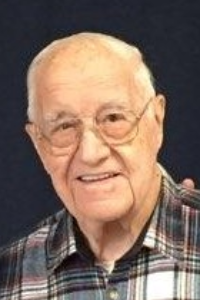 Leo A. Robidoux, 92, of Woonsocket died Saturday evening March 28, 2020 at The Friendly Home. He was the loving husband of the late Doris (Masse) Robidoux. They were married on October 5, 1946 at Precious Blood Church and shared over 46 years together until her passing in May 1993.
Born and raised in Granby P. Q. Canada he was a son of the late Ovila and Aldea (Gregoire) Robidoux. He immigrated to the United States when they married in 1946.
Mr. Robidoux served in the United States Marine Corps during the Korean War. Upon his honorable discharge in 1953 Leo became a U.S. citizen, a very proud moment in his life.
Mr. Robidoux was employed by Armour Foods in the maintenance, refrigeration and purchasing departments for over 30 years until his retirement. He served as the vice president of the United Food & Commercial Workers Union Local #328. Leo was a lifetime member the Woonsocket AMVETS Post. He was a longtime communicant of St. Joseph’s Parish.
Leo enjoyed a very active retirement during which he served as the past treasurer of the St. Agatha’s Senior Citizens where he was a member for almost 40 years. He was also an active member of St. Joseph senior citizens and was previously involved with the former Holy Family senior citizens as well as the Golden Hearts at Sacred Heart parish. Leo was responsible for organizing numerous bus trips for the members of the St. Agatha Seniors. Leo personally saw to it that everyone on the trips would have their arrangements all in order and that everyone had a fun and memorable time.
As recalls the image of the late great Kenny Rogers, Leo was “The Gambler”. His many forays to gaming locales both near and far, were a constant source of fun and excitement for him. Be it Atlantic City, across the country toward the glittering call of Las Vegas, or to more local venues like Foxwoods, Mohegan or Twin River, Leo always took his chances and “tried his luck”, all in good fun. Leo also enjoyed taking many trips back up to visit family and friends in his “old stomping grounds” around the province of Quebec.
Leo will be remembered as a devoted husband and father. A fine gentleman, with a cheerful and positive outlook, Leo was proud of his French-Canadian heritage and was an even prouder Marine and American. “Semper Fi”!
Leo is survived by his son and best friend Gerard L. “Gerry” Robidoux and his fiancée Fran Roy of Woonsocket. He is also survived by his brother Gerald and Jeannine (St. Louis) Robidoux of St. Damase P.Q. Canada. He was the bother of the late William and his wife the late Monique (Davigon) Robidoux. Leo is also survived by several nieces, nephews and cousins and their families both locally and in Canada.

A Memorial Mass for Leo A. Robidoux will be on Saturday August 8, 2020 at 10:00am in St. Joseph’s Church 1200 Mendon Rd. Woonsocket. Military honors to follow after Mass. All who knew Leo are invited to attend. There will be an opportunity to pay your respects to the family both before and after the Mass.

In lieu of flowers Masses for his intention are welcome or memorial donations may be made to St. Jude Children’s Research Hospital 501 St. Jude Pl. Memphis, TN 38105 or www.stjude.org. Arrangements are in care of the Menard-Lacouture Funeral Home, 127 Carrington Ave. Woonsocket.
www.menardfuneralhome.com