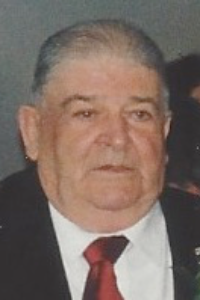 Antonio DeMelo, age 93, of Taunton, passed away, surrounded by his loved ones on Saturday, March 28, 2020 at Morton Hospital in Taunton. He was the beloved husband of Deodata (Silva) DeMelo, to whom he was wed for the past sixty-seven years.

Born in Sao Miguel, Faial da Terra, Portugal on November 17, 1926, he was a loving son of the late Jose P. Resendes and Emilia C. Melo.

Antonio grew up and was educated in Portugal. While living in Portugal, he served in the military, was a member of his hometown band and was a well-known chef who had the honor of cooking for government officials.

In 1977, Mr. DeMelo moved to United States and settled in Taunton where he has made his home ever since and was a communicant of Saint Anthony’s Church in Taunton. Prior to retiring, he had been employed at the Mason Company in Taunton.

Antonio loved spending time with his adoring family and of course cooking. His hobbies included tending to his grape vines and vegetable gardens, making wine and the impeccable way in which he maintained his yard.

Due to health factors, Antonio’s funeral service will be held privately at the Taunton Memorial Funeral Home, 8 Crapo St. in Taunton. Private burial will follow at Saint Joseph’s Cemetery in Taunton.

Antonio’s family sadly regrets not having public visitation and funeral services. They wish all to stay healthy and asks those wishing to leave them a message of condolence to visit www.tauntonfuneral.com