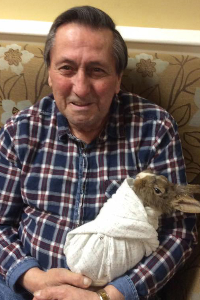 
Richard A. ‘Dickie’ Silva, 83, of North Truro died peacefully, Wednesday, March 25, at Harbor Point at Centerville where he resided for the last year. He was the husband of Sheila E. [Costa] Silva, whom he married in 1985.

Dickie was born in Provincetown, the son of the late James M. and Eva [Pierce] Silva. When he turned eighteen, he enlisted in the United States Air Force, serving his country proudly as a Korean War era member of the Strategic Air Command.

Upon returning home he worked with his father doing small construction jobs. He also worked for George Colley Seafood Packers, hauling fish to New York, Canada and Pennsylvania. He relocated to Springfield and continued driving, often making long distance hauls. He eventually returned to Provincetown and working with his brother, Warren “Pinky” Silva. He also continued to drive trucks, something he loved doing. In 1976 he joined Engine 3 of the Provincetown Fire Department. In 1978, Dick went to work for the Town of Provincetown and eventually became the DPW Director of Operations/Highway Superintendent. He retired in January, 2000.

Dick loved fishing and always eagerly looked forward to getting his over sand permit. He enjoyed playing the slots at the casino and would happily recount the time he “hit it big”. He also loved scratch tickets and thought those were the best birthday or Christmas gift. He and his wife spent many happy years together traveling to Florida, Colorado and Foxwoods.

In addition to his wife Sheila, he is survived by his brother Warren Silva and wife Rita, and sister Shirley Cabral, all of Provincetown, daughters Marie Hopkins and husband Junius of Sandwich, Judith Reece and husband Dennis of Texas, Robin Millard of Southbridge, , Bonnie Colon and husband Ronald of Southbridge, Anne Boulos and husband Thomas, also of Southbridge, Beth Angelini and her husband Bill of Attleboro, and Betty-Jo Silva of Harwich. He is also survived by twenty-six grandchildren and twenty-six great grandchildren. He also leaves his step children Christine Roderick and husband Ryan of Milbridge, ME, Karen Silva and her husband Paul of Provincetown, James Costa and wife Jennifer Neargardner of Colorado Springs, CO and Michael Costa and his wife Simone Ivy of Provincetown. He is predeceased by his children Angela, Ricky and Randy as well as his grandchildren Tharen, Adam and Candace.

Due to the current health crisis and resulting government restrictions, Dick's Graveside Service will be private. Burial will be in Provincetown Cemetery. A Memorial Visitation with the family, honoring Dick’s life will be held at the Gately Funeral Home in the fall, at a date and time to be announced.

If desired, contributions in Dick’s memory can be made to Carrie A. Seamen Animal Shelter, 5 Sandy Hill Lane, Provincetown, MA 02657.