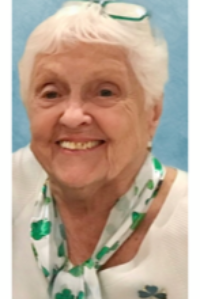 TEWKSBURY: June Marie (Hirschfeld) Tontodonato, age 86, a longtime resident of Tewksbury went to her eternal resting place on Thursday, March 26, 2020 while at home surrounded by her family. She was the beloved wife of James M. Tontodonato, who predeceased her in 1994.

June was born on March 20, 1934 to the late Marland and Marie (McCarthy) Hirschfeld. The youngest of four, she was taught at an early age to value family and her faith. Her siblings Muriel, Billy, and Jackie gave her the pleasure of being the favorite aunt to 19 nieces and nephews.

June was raised and educated in Medford and Somerville, graduating from Somerville High School 1951. It was during her senior year that she met the love of her life while they both worked at Filene’s in Boston. Soon after, they married, started their family, and settled in Tewksbury. June became the “jewel of the neighborhood” and stayed in this home for the remainder of her years. During summer vacations, June could be found on the front porch of the Hiawatha overlooking York Beach.

Family, friends and faith were the central part of June’s life. She was an active member of St. William’s Parish and the Ladies Sodality. For over thirty years, her friendly smile was the first to greet the patients of Dr. Lawrence McCartin. She was an avid Boston sports fan and enthusiastic supporter of her grandchildren’s sporting events. This passion continued even with her great-grandchildren!

Due to current public health circumstances, private services will be held at this time.

A Memorial Mass for June will be offered at St. William’s Church in Tewksbury at later date with a celebration of life to follow.

Those who wish may make a donation in June’s memory to the Oblate Infirmary Fund, 486 Chandler St., Tewksbury, MA 01876. Expressions of sympathy and support may be mailed to Farmer & Dee Funeral Home, 16 Lee Street, Tewksbury, MA 01876. Attn: Tontodonato Family or by leaving a condolence message on this website.