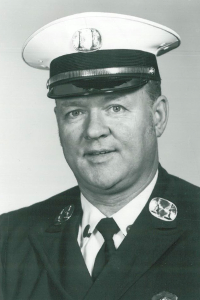 Arnie was a lifelong Malden resident. He was a United States Air Force Korean War Veteran as well as Fire Captain of the Malden Fire Department Engine 3 Retired. Arnie was also a proud member of many local lodges and organizations. He belonged to the Malden D.A.V, The East Side Athletic Association, The Irish American Club, The Italian American Club, and The American Legion and served as Past Exalted Ruler of the Malden Elks. One of Arnie’s favorite activities during retirement was making his daily rounds to “sign the books” at the clubs.

Arnold was the beloved husband of 63 years to Margaret (Little) Hammersley. He was the loving father of David Hammersley, Donna Smith and Paul Hammersley and his wife Lisa. He was the very proud Papa of 7 grandchildren and 3 great-grandchildren and the loving brother-in-law to George Little. Arnold was the devoted son of the late Vernon and Gertrude Hammersley and loving brother of Francis, Edward, Richard and S. Ann Francis Hammersley, all whom preceded him in death. He was also an uncle to many wonderful nieces and nephews.

In accordance with the Department of Public Health and restrictions on gatherings due to COVID-19, services will be private. A memorial service for family and friends will be held at a later date.

To send a message of condolence online visit www.spadaforafuneral.com