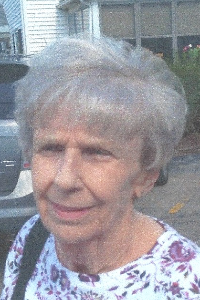 Patricia M. (McDermott) Lee, age 83, of Mansfield, formerly of Randolph, passed away peacefully, surrounded by her loving family on Wednesday, March 25, 2020 at the Village at Willow Crossings in Mansfield. She was the former wife of the late Henry J. Lee.

Born in Boston, MA on August 10, 1936, she was a loving daughter of the late John F. and Margaret I. (Murray) McDermott.

Pat grew up in Milton and was a 1952 graduate of Milton High School. She had made her home in Mansfield for the past 1 ½ years and was a former longtime resident of Randolph.

Prior to retiring, Patricia had worked for many years as an X-Ray Technician for Dr. Robert A. Mcguirk, an Orthopedic Surgeon in Braintree. As a young girl, fresh out of high school, she worked for the District Attorney’s Office in Boston.

Pat loved spending time with her family and while living in Randolph was a communicant of Saint Bernadette’s Church. She was an avid fan and supporter of the Patriots and Red Sox and her hobbies included sewing, shopping and when younger, trips to Scusset Beach on Cape Cod.

She is survived by her devoted children: James M. Lee of Quincy, Kathleen P. Tagliente and her husband James of Amesbury, Susan E. Slarve of Mansfield and her late husband David Slarve and the late Kevin P. Lee, who is survived by his wife Christin Lee of Quincy. She was the cherished grandmother of Andrew and Jennifer Lee, Meghan and Brendan Lee, Taylor, Hayley and James Tagliente and Amanda and Danielle Slarve. She was the dear sister of the late Margaret Berberan and the late John McDermott, who is survived by his wife Lorraine McDermott of Milton. She is also survived by her loving nieces and nephews and lifelong friend Peggy Linskey of Randolph.

A graveside funeral service, to which relatives and friends are cordially invited to attend, will be held on Tuesday, March 31st at 12:00 P.M. at the Milton Cemetery, 211 Centre St. in Milton.

Visiting hours are omitted and those with may remember Patricia with a donation in her memory made to the Alzheimer’s Association, 309 Waverley Oaks Road, Waltham, MA 02452.