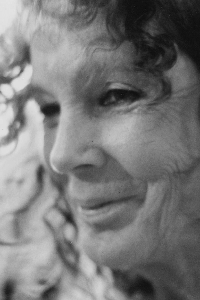 
Poet, linguist and teacher, Nell Husted, a longtime resident of the Outer Cape, died on March 12th at Cape Cod Hospital, surrounded by her loving family. She was 87.

Born in New York City, Nell first came to the Cape in the 1950s to visit her in-laws Paul and Nina Chavchavadze, Russian/Georgian emigres who had escaped the 1917 Bolshevik Revolution, settling in Wellfleet in 1939. After her divorce from David Chavchavadze, Nell married William H. Lanagan, her adored companion until his death in 2011.

A linguist with a remarkable gift for language, Nell spoke five languages fluently, and taught at both Georgetown and American University while raising her daughters as a single mother. During that time, she was a frequent guest at the Kennedy White House, where she was nicknamed “Vox Populi” (voice of the people), a nod to her fearless candor while advocating for others. She is mentioned in numerous books about that era.

Nell moved to Provincetown in the 1970s, where she devoted herself to her poetry, publishing several chapbooks. On the Cape she lived simply, first in an apartment above WOMR for many years, and later in a cottage in the Wellfleet woods. Nell reveled in the intense beauty of the Outer Cape, which is the central theme of her poetry. Inspiration often came from her daily walk at Ryder Beach.

She is survived by her daughters, Maria Chavchavadze and Sasha Chavchavadze, her son-in-law PK Ramani, her grandchildren - Nella Rasic, Alexander C. H. Ramani and Lila Ramani, her sisters Caroline Husted and Priscilla Griscom, and her five beloved stepchildren, niece and nephews.

Brilliant, rebellious and beautiful, Nell will be remembered by her family and many friends for her loving kindness. A stone will be placed in her memory next to her final partner and soulmate Johnathan Perry in the Provincetown Cemetery.

At her request, there will be no public funeral, but a private memorial in the coming months for friends and family near Blackfish Creek, the place she considered home.

Donations in her memory can be made to American Friends of Georgia at https://afgeorgia.org. Condolences and memories can be sent to nella.rasic@gmail.com.