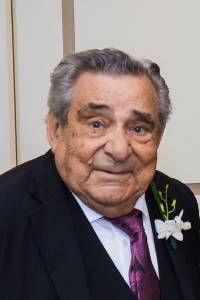 Manuel “Lucky” Gomes, age 93, died on March 2nd, 2020 at home with his family by his side, after a period of declining health. He was the husband of the late Angelina “Angie” Gomes, and the son of the late Antonio and Louisa (Fernandes) Gomes.
He was born in New Bedford. At the age of 16, he enlisted in the US Navy and was part of the Underwater Demolition Team, serving there for 3 years before transferring to the US Air Force for 19 years. He proudly served his country in three wars: WWII, the Korean War and the early onset of Vietnam, where he took recognizance photographs. He married his wife Angie in 1953, and they traveled around the world together as he honorably served in the Armed Forces. He retired in 1965 with the rank of Tech Sargent 1st Class.
In 1966, after his military career, he and his wife Angie started Taunton Home Decorating. The business flourished for over 40 years in downtown Taunton. Later in life, he enjoyed spending time with his beloved friend and longtime companion Alice Frates of Dartmouth, especially dancing on Saturdays at Café Portugal. He was a member of the Air Force Association, The VFW, The American Legion, and The Mount Carmel Seniors. Lucky relished every day and enjoyed spending time with his family and friends more than anything. On any given afternoon, you could find him relaxing outside by the pool, his favorite spot.
He is survived by his three children, Deborah Smith and her husband Edward of Taunton, Bradford Gomes and his wife Maria of Raynham, and Darren Gomes and his wife Denise of Pocasset. He is also survived by his nine grandchildren: Tylor Gomes, Jessica Bairos, Alyssa Smith, Alexander Gomes, Connor Smith, Angelina Smith, and Samantha Gomes, Cody Rose and Jesse Gomes. Funeral from the O’Keefe-Wade Funeral Home 70 Washington Street in Taunton on Friday at 9:30 AM followed by a Mass of Christian Burial at the Annunciation of the Lord Church in Taunton at 10:30 AM. Calling hours will be held on Thursday from 4-8 PM. A graveside service will military honors will be held at the Massachusetts National Cemetery in Bourne, MA at 1:15 PM. In lieu of flowers donations in Manny’s memory may be made to South Coast Hospice, 200 Mill Road, Fairhaven, MA, 02719.