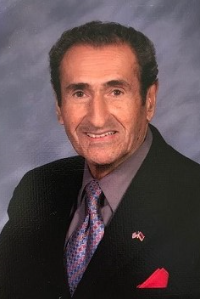 TEWKSBURY: Agop “John” Dulgarian, age 92, a resident of Tewksbury for 60 years, passed away at his home on Wednesday, February 12, 2020, one day prior to his 93rd birthday.

He was the beloved husband of Rita (Colletta) Dulgarian, who passed away in 2005.

Born in Chelmsford on February 13, 1927, he was the son of the late Tateoss and Satenig “Tina” Dulgarian.

John was raised in Chelmsford, attended Chelmsford schools, and graduated from Chelmsford High School in 1944.

In 1945, he was inducted in the U.S. Army and served as Staff Sergeant during World War II with the 209th Anti-Aircraft Artillery Automatic Weapons Special Battalion and the 389th Infantry Division. John worked as his unit’s Intelligence S-2, managing intelligence oversight, physical security, and security clearances. He served in the Pacific Theater in Osaka, Yokohama, Nagoya, Omori, and Tokyo, Japan, and was among the first American soldiers to occupy Japan after the dropping of the Atomic Bomb. He was awarded several decorations for his military service including the Army Occupation Medal, the Asiatic Pacific Campaign Medal, and the World War II Victory Medal.

Following his military service, John attended Lowell Technological Institute at night, and received his A.S. Degree in Electrical Engineering while working days as an Industrial Engineer for the Western Electric Company, where he was employed for 44 years.

John was a member and past trustee of the Riverside Assembly of God Church in Methuen. In addition, he was a member of the Belmont American Veterans Post # 2008, and the Tewksbury American Legion Post # 2159.

Calling hours are Tuesday, Feb. 18 from 10 a.m. to 12 p.m. at the Farmer & Dee Funeral Home, 16 Lee St., Tewksbury, immediately followed by a prayer service to be held at the funeral home. Services will conclude with interment at Edson Cemetery, Lowell. In lieu of flowers, donations in his memory may be made to Riverside Assembly of God Church, 15 Lowell Boulevard, Methuen, MA 01844, NorthRidge Church, P.O. Box 303, Derry, NH 03038 or to the Edith Nourse Rogers Memorial V.A. Hospital, 200 Springs Road, 135 Voluntary Service, Bedford, MA 01730.