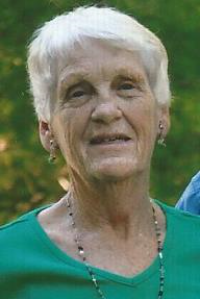 STEEP FALLS- Dorothy Elizabeth Dyer, age 84, passed away on Feb. 12, 2020 at Maine Medical Center in Portland.
She was born in Portland on Dec. 4, 1935, a daughter of the late Charles and Margaret (Virgin) Geyer.
Dorothy graduated from South Portland High School in 1954 and later attended the Mercy School of Nursing.
She will always be remembered for the enjoyment she received from music, reading, knitting, cooking, camping, playing Scrabble, square dancing with the Pine Tree Squares, and being with her family – especially her grandchildren and great grandchildren. She took pleasure in providing a warm and inviting home to all who entered.
In years past, she was an active member of the Steep Falls Fire Department Women’s Auxiliary. She attended the East Baldwin Congregational Church.
Dorothy is predeceased by her siblings- Mary Reitze, Charles Geyer Jr., Helen Smullen, and Harold Geyer; her daughter-in-law- Edwina Dyer; and a beloved grandson- Anthony Albert.
She is survived by her beloved husband of 62 years- Norman Dyer Sr.; children- Norman Dyer Jr. and his wife Wanda of Raymond, Carol Farrow and her husband Wilburn of Baldwin, Wayne Dyer of Steep Falls, and Amy Albert and her husband David of Lancaster, SC; brother- George Geyer and his wife Madeline of Windham; sisters- Peggy Davis and her husband George of Westbrook and Donna Meeker of Buxton; eight grandchildren; nine great grandchildren; and many beloved nieces and nephews
Dorothy’s family would like to thank the wonderful and caring staff at Maine Medical Center for their excellent care.
A private memorial service will be held at the Poitras, Neal & York Funeral Home, Cornish.
Online condolence messages can be submitted at www.mainefuneral.com
Memorial contributions can be made to the East Baldwin Food Pantry, PO Box 49, East Baldwin, Maine 04024