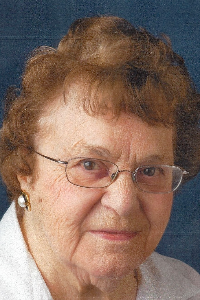 Mildred G. (Valencourt) Ritchey, age 94, of Mansfield, passed away peacefully on Wednesday, February 12, 2020 at Norwood Hospital. She was the beloved wife of the late Melvin S. Ritchey, to whom she was wed for fifty-five years at the time of his death in 2003.

Born in Novi, Michigan on April 19, 1925, she was a loving daughter of the late Perry and Ruth (Grance) Valencourt.

Mrs. Ritchey was a dedicated homemaker to her adoring family, who were truly the essence of her life and also assisted her late husband as a bookkeeper in his work. She had made her home in Mansfield for many years, was an active member of the Mansfield Baptist Church, a lifelong member of the Church of the Brethren and a former resident of Norwood, Needham and Switzerland.

Mildred was always interested in local and national politics. She was proud to have always voted in elections and her hobbies included reading, doing crossword puzzles, as well as some handwork. She was a member of the Achiever’s Toastmasters Club and obtained the honor of lifetime member. While residing in Mansfield, Mildred was also an active supporter of the Black Box Theatre.

Visiting hours, to which relatives and friends are cordially invited to attend, will be held on Saturday, February 22nd from 4:00-6:00 P.M. at the Sherman & Jackson Funeral Home, 55 North Main St, Mansfield.

A memorial service will be at The Mansfield Baptist Church in Mansfield at a later date and burial will be private.

In lieu of flowers, Mildred’s family has requested that contributions in her memory be made to the Mansfield First Baptist Church, 52 North Main St., Mansfield, MA 02048.