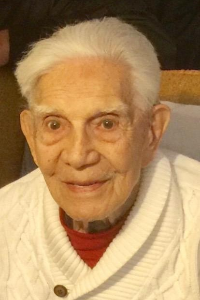 On Tuesday, February 11, Honorio Potvin (Carnie) Carnivel, loving husband and father, passed away at the age of 103.

Carnie or Uncle Chib, as he was lovingly known to his nieces and nephews, was born in Fall River, MA on November 22, 1916 to Gregorio Evangelista Carnivel and Delphine Potvin Carnivel. As a young man he went to work for the civil service/government as a messenger. He moved up to the blueprint room and, soon after, got a job as an apprentice draftsman. He earned his engineering degree at night school and, when he retired, he was the head of the design department at Hanscom Field US Air Force Cambridge Research Lab.

In 1940 he married Mary Viverios and they eventually moved to Newburyport when they raised their son Carl Joseph Carnivel. Mary predeceased him in 1980 following a long illness. Later he met and married Virginia (Ginny) Cooke on April 4, 1987. Ginny wore purple. Carnie wore a white tux with purple. They looked beautiful! They danced the night away.

Carnie and Ginny loved to travel and did so extensively. They met at a dance hall and, during their courtship, danced 6 nights a week. They enjoyed entertaining, having family and friends fill their house with laughter and love. One never left Carnie’s house hungry.

He loved to read, changing to books on tape when his eye sight started to fail. Well into his 100s, his curiosity and thirst for knowledge never waned. He read books on history, science, technology and economics. He was a brilliant conversationalist on subjects from the first automobile he saw as a boy to the news of the week.

Carnie was preceded in death by his wife Mary, his father Gregorio, his mother Delphine, and his two sisters and Alice (Carnivel) Pelagio and Doris (Carnivel) Alves. He is survived by his wife Ginny, his son Carl, his granddaughter Dawn Darling, his great grandson Kyle Darling, stepchildren Steve Bellemore, Cindy LaCasse and her son Joshua LaCasse and his girlfriend Brittany Wilkes as well as many loving nieces and nephews.

Funeral service to which relatives and friends are invited will be Saturday, February 15, 2020 at the Potter Funeral Home at 10:00 A.M.

Visitation will be Saturday, from 9-10 A.M., prior to the service.

Interment will be in Notre Dame Cemetery, Fall River.