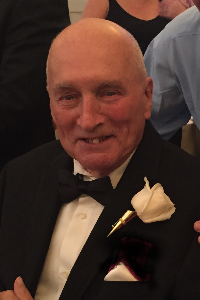 Robert "Bob" Collier, (FORMER OWNER OF COLLIER'S MARKET) a lifelong resident of Charlestown, entered into eternal life peacefully surrounded by his loving family on Tuesday, February 11, 2020. He was 83 years of age.

Bob was born in Danvers on September 13, 1936, a son of the late Joseph J. Collier and Mary A. (Losier) Collier. He grew up in Charlestown where he was educated in the Boston Public School system and graduated from Charlestown High School. Bob worked as a meat cutter for over 28 years for First National Stores and retired in 1980. In 1980, Bob began the legacy of Collier's Market on Bunker Hill St. in Charlestown and served the many people and families of Charlestown and surrounding communities with his expertise in meats and sandwiches. During any day of the week from 1980 to 2000, Mr. Collier along with his wife and 9 children were always welcoming to the next customer at the family store for a good sandwich or even better to just stop by and say hello. Following 20 years of faithful and generous service to the people of Charlestown, Mr. Collier and his family decided to retire and closed the store in 2000. Bob was very instrumental in Charlestown Pop Warner and Charlestown Little League where he always enjoyed coaching.

Relatives and friends are invited to attend Bob's Funeral on Saturday, February 15, 2020 at 9 A.M. from The Carr Funeral Home, 220 Bunker Hill St. Charlestown followed by his Funeral Mass in St. Francis De Sales Church, 313 Bunker Hill St. Charlestown at 10 A.M. His burial will be at Woodlawn Cemetery in Everett. His visiting hours will be on Friday, February 14, 2020 from 3 to 8 P.M. in the funeral home.

The Collier family would like to express their sincere gratitude to Beacon Hospice of Charlestown for their care and compassion given to Bob during his illness.