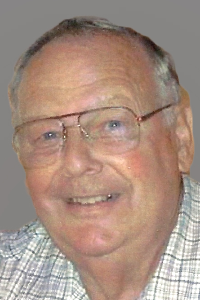 LACONIA-----Roger Byron Webster, 91, of Laconia, formerly of Gilmanton Iron Works and Gilford, passed away peacefully on Wednesday, February 5, 2020 at Ledgeview in the Taylor Community surrounded by family.

Roger was born on November 18, 1928, (which he proudly shared with Mickey Mouse) in Portsmouth, NH, the son of Earl A. and Lucille A. (Paul) Webster.

Roger spent his early years in Portsmouth and spent summers working with his grandmother at his family-owned gift shop at Short Sands in York Beach, Maine. After graduating from Portsmouth High School in 1947, he moved to San Francisco, CA where he worked for the Flying Tigers and Pan American World Airlines. While with Pan Am, he worked as a supply clerk on Wake Island. Roger loved telling his family and friends stories of his adventures on Wake and in the orient.

Drafted in 1950, Roger served in the U.S. Army during the Korean War and continued his service in the Army Reserve for over 20 years.

On his return to New Hampshire Roger enrolled at UNH on the GI Bill. While at UNH he met his future wife, Patricia Hikel. They graduated in June of 1955 and married on June 18, 1955.

Roger and Pat settled in Gilmanton IW, owning and operating Webster’s General Store in Gilmanton IW for several years. He later worked at local lumber yards, as a salesman for building supply companies, and then owned a metal building and roofing company in Londonderry, NH.

In retirement, Roger and Pat enjoyed spending winters in Mesa, AZ, where they had many friends and traveled to Alaska, Italy, and Hawaii.

Roger was an avid photographer and had a private pilot’s license. He loved any kind of history and readily shared his knowledge. Roger was also quick with a joke. He was very personable and kind and very welcoming. Ten minutes after meeting him, you knew you had a friend for life.

Roger was a member of the American Legion Post 102, Ellis-Geddes-Leavitt, Gilmanton, NH, member and a past president of the Kiwanis Club of Laconia and a 20 year volunteer at LRGH.

He was predeceased by his wife, Patricia (Hikel) Webster in 2019, his parents and his sister, Felicia Hamm.

A private burial with be held in Harmony Grove Cemetery, Portsmouth NH in the spring.

In lieu of flowers, memorial donations may be made in Roger’s name to Lakes Region Scholarship, P. O. Box 7312, Gilford, NH 03247, for the Kiwanis Club of Laconia College Scholarship Fund.