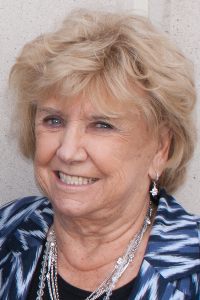 CONDON, Mary (Barry) of Westwood, (formerly of Osterville and Milton) departed this life on February 8, 2020, leaving behind a legacy marked by love of family, deep religious faith, great appreciation for the transformative power of education, and an unending curiosity about the places, people, and ideas that colored her nearly 93 years. Born on February 28, 1927, the second of Philip and Rosina (Piscatelli) Barry’s 12 children, Mary will be missed by six surviving children, 20 grandchildren, 12 great grandchildren, five surviving brothers and sisters, and dozens of sons- and daughters-in-law, nieces, nephews, and friends.

Mary grew up on Mission Hill in Roxbury, Massachusetts. In 1948, she graduated from Emmanuel College and, a year later, married the late Thomas F. Condon, also of Mission Hill, with whom she raised seven children. Married for 63 years, the pair traveled the world – with Mary as tour guide, visiting and collecting antiquities from India, Kashmir, China, Hong Kong, Malaysia, Singapore, Japan, Indonesia and Thailand, and frequenting cities throughout Europe – especially Rome, where Mary came to spend weeks at a time in her retirement years. Over the course of her 30 trips to Italy, she developed a tradition of bringing along her granddaughters, introducing them to the culture and history of their ancestors and sparking a travel bug in many.

Mary began work as a special education teacher in the Boston Public Schools (BPS) in 1966. She later became an administrator in the BPS Department of Student Support Services, where she planned and developed a number of innovative initiatives for special needs students, including Early Childhood Learning Centers, Special Education vocational programs, and a Special Education Technology Center that became a national model for bringing the benefits of technology to children with disabilities. Her roles during 20 years in the BPS included Assistant to the Associate Superintendent and Senior Officer for Student Support.

Upon retirement, Mary went back to school, earning a degree in Theology from Harvard University. Mary was a lifelong, devout Catholic and her Harvard degree inspired a post-retirement vocation teaching Bible Study classes at various Catholic churches on Cape Cod – where she and Tom spent their later years.

While Mary’s was a life bursting with new experiences and knowledge, its cornerstone was her family. She delighted in hearing about the latest pursuits of her children and grandchildren and was happiest when surrounded by them. In addition to her husband, Mary was pre-deceased by her son, Thomas Condon of Dorchester, as well as her siblings John, Philip, Patricia, Vincent, and Paul Barry and Elizabeth Bent. She is survived by her siblings Rosemarie Donovan, Hellena Burrill, Frank Barry, Joseph Barry, and William Barry. She also leaves her children Philip Condon and his wife Peg, of Wellesley, MA; Joanne Cross and her husband Gary, of Centerville, MA; Robert Condon and his wife Laura, of Norton, MA; William Condon and his wife Lisa, of Melrose, MA; Marianne Whelan and her husband Ken, of Cheshire, CT; Anthony Condon and his wife Waike, of Burlington, MA; and her daughter-in-law Deborah Moleca of Dorchester, MA.

Visiting hours will be held from 4 to 8 p.m. on Thursday, February 13th at the Gormley Funeral Home, 2055 Centre Street, West Roxbury, MA. A funeral mass will be held at 10 a.m. on Friday, February 14th at Mary’s childhood church, The Basilica and Shrine of Our Lady of Perpetual Help, 1545 Tremont St, Boston (please go directly to the church). Burial will take place on Saturday, February 15th at 2pm. at St. Francis Xavier Cemetery, Pine St, Centerville, MA. In lieu of flowers, donations may be sent to EdVestors, 140 Clarendon Street, Suite 401, Boston, MA 02116. https://www.edvestors.org/