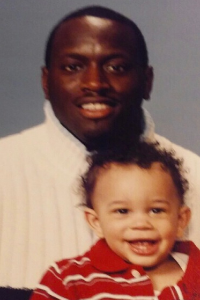 
Troy Demetrius Gooding was born on December 30, 1973 in Boston, MA. He is the son of Nancy (Gooding) Cordeiro, formally of Somerset, MA now residing in Richlands, NC. Step-father Robert Wright (deceased) of Mattapan, MA and father James Grant (deceased) of Kinston, NC. Baptized at Morning Star Baptist Church June 16, 1990 in Mattapan, MA. In his early years of life Troy married Allison Cafarelle in September of 2005, along with a son Javonn.

The family of the late Troy Demetrius Gooding wishes to acknowledge everyone with sincere appreciation of all condolences, and floral tributes.

Troy Demetrius Gooding departed from this living world. Troy was a very pleasant, spunky and respectful person. He was a very humorous person, who was well liked by anyone he met. He was very talented in Arts, Music and studied countless other subjects.

A celebration of life service will be held Saturday February 15, 2020. Services will be from 12pm to 3pm at Casper Funeral Home 187 Dorchester Street in South Boston.