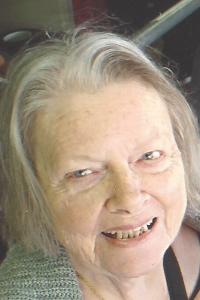 Joan M. (Daley) Cutillo, age 87, of Mansfield, passed away peacefully at her residence, surrounded by her loving family on Friday, February 7, 2020. She was the beloved wife and best friend of the late Samuel G. Cutillo, to whom she was wed for sixty-seven years at the time of his death on February 16, 2019.

Born in Stoughton, MA on November 9, 1932, she was a loving daughter of the late Donald F. and Marjorie (Boutiller) Daley. Joan grew up in Stoughton and was a graduate of Stoughton High School.

A member of the Mansfield Community for the past sixty-nine years, Mrs. Cutillo was well known for her service to the Town of Mansfield. Following a career that spanned twenty-eight years at the Mansfield Town Hall, Joan retired as the towns treasurer and also served several times as an interim Town Manager.

A communicant of Saint Mary’s Church in Mansfield, Joan was a dedicated homemaker to her treasured family and was the number one supporter of her late husband’s events in the Mansfield Lions Club. Her family always came first, and her grandchildren and great grandchildren were the apples of her eye.

Mrs. Cutillo also enjoyed entertaining at her family’s pool, reading, floral arranging and had a special place in her heart for animals. When younger, she and Sam shared an interest in roller dancing and bowling.

She is survived by his devoted children: Ronald F. Cutillo and his wife Jo-Anne of Mansfield, Diane M. Tibbetts and her husband John of Foxboro, Karen E. Walker of Taunton and Jeffrey M. Cutillo and his wife Wendy of Mansfield. She was the dear sister of the late of Richard Botsch and Robert Botsch. She is also survived by her cherished 9 grandchildren, 4 great granddaughters, as well as many nieces and nephews.

Her funeral service, to which relatives and friends are cordially invited to attend, will be held on Wednesday, February 12th at 11:00 A.M. at the Sherman & Jackson Funeral Home, 55 North Main St., Mansfield. Burial will follow at Saint Mary’s Cemetery in Mansfield.

In lieu of flowers, Joan’s family has requested that contributions in her memory be made to the Mansfield Animal Shelter, P.O. Box 25, Mansfield, MA 02048.