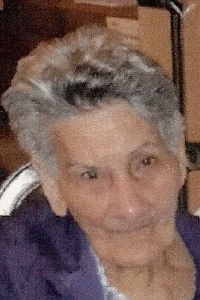 Ramona Sanchez Padilla, age 88, of Taunton, passed away peacefully at home, surrounded by the embracing love of her cherished family on Thursday, February 6, 2020.

Born in Morovis, Puerto Rico on September 14, 1931, she was a loving daughter of the late Ramon Sanchez and Ana Padilla.

Ramona grew up and was educated in Puerto Rico. In 1970 she moved to the United States and settled in Taunton. She returned to Puerto Rico in 1980 and later came back to Taunton in 1994, where she has lived ever since.

Prior to retiring, Ramona was employed as a folder at Reny’s Curtain Factory in the Weir Section of Taunton. While residing in Puerto Rico, she worked on pineapple farms.

A communicant of Saint Mary’s Church in Taunton, Ramona’s greatest gift in life was her treasured family who will miss her dearly. She enjoyed playing bingo, joking around and will always be remembered as a big flirt who always had an eye for the guys.

She is survived by her devoted children: Mirna “Lucy” Sanchez of Taunton, Teresa Sanchez of Puerto Rico, Carmen Miranda of Rockland and the late Jose Sanchez and Jesus Sanchez. She was the dear sister of Maria “Malgda” Melendez, Candida Sanchez, Doris Sanchez, Carmen Sanchez, Juan Ramon Sanchez and the late Roberto Sanchez and Maria “Lin” Burgos. She is also survived by her precious 7 grandchildren, 15 great grandchildren, as well many-many nieces and nephews.

Her funeral, to which relatives and friends are cordially invited to attend, will begin on Monday, February 10th at 9:30 A.M. from the Taunton Memorial Funeral Home, 8 Crapo Street (Off Route 140, Tremont Street) Taunton followed by a Mass of Christian burial celebrated at 10:30 A.M. in Saint Mary’s Church, Saint Mary’s Square, Taunton. Burial will follow at the Mayflower Hill Cemetery in Taunton.

Visiting hours will be held on Sunday, February 9th from 4:00-7:00 P.M. at the Taunton Memorial Funeral Home.

To send her family a message of condolence, please visit www.tauntonfuneral.com