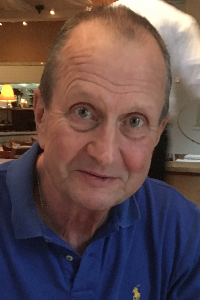 Jeff was a graduate of Needham High School in Massachusetts. He later attended the University of Massachusetts, Amherst, where he graduated magna cum laude, earning a degree in history. Jeff began his professional career working in the real estate industry as a site selection specialist for Bank Boston and Data General, which served as a springboard for his successful career as a commercial real estate broker. His expertise was multi-faceted, but perhaps what he was best known for was tenant representation. His advanced skill set in negotiating commercial leases was considered cutting edge, a trait recognized by the then budding international real estate firm Cushman & Wakefield. In 1982, Jeff, Martha and their daughter, Jessica, moved to Clearwater, Florida after he accepted a position with Cushman & Wakefield’s Tampa office. Jeff’s pioneering approach to tenant representation attracted a long list of loyal clients including Digital Equipment Corp, Wang Labs, Post Buckley Schuh & Jernigan, Fireman’s Fund Insurance Company and Invest Financial Services, among many others. He retired from Cushman & Wakefield in 2003.

Jeff was a devoted husband and father. The unexpected loss of his wife, Martha, took its toll on his grieving heart. He died minutes before the one-year anniversary of her death. Theirs was an epic love story. They met at the age of thirteen at Pollard Junior High School, in Needham. Throughout junior high school and high school, Martha sat in the seat in front of Jeff in homeroom. In the tenth grade, Jeff began walking Martha to school, carrying her books and making her smile along the way. They were inseparable. Despite attending college in different states, their love, as is the case with soul mates, continued to grow. Martha and Jeff always said there was nothing in their lives that they were more proud of than being Jessica’s parents. Jeff (and Martha) leave many broken hearts behind from their legion of relatives, friends and co-workers; none more so than Jessica’s…and Gracie’s.

A visitation will be held in the George F. Doherty & Sons Funeral Home, 1305 Highland Ave., NEEDHAM, on Saturday, Feb. 8 from 10:00-11:00am followed by a funeral service beginning at 11:00am in the funeral home. Relatives and friends kindly invited. He will be buried with his beloved partner and wife, Martha Feeley in Needham Cemetery.