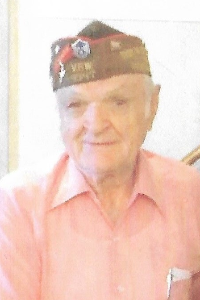 Lionel L. LeBlanc, 94, died February 2, 2020 at The Arbors in Bedford following a lengthy illness.
He was born in Manchester on July 11, 1925 the devoted son of Raphael and Celine (Therage) LeBlanc. He leaves a sister, Lorraine Boutin of Manchester.
He was predeceased by his wife, Mildred LeBlanc in 1985 and two brothers.
He retired as a Master Sergeant after spending 30 years in the Air Force. Lionel joined the Army Air Corps and served in World War ll, (1943– 1946) earning numerous medals including the Asiatic Pacific Theatre Medal, American Theatre Campaign Ribbon, Army of Occupation Medal, Victory Medal and Good Conduct Medal.
Lionel was an active member of the Queen City Memorial VFW Post 8214, American Legion Sweeney Post 2, the Elks Club and the DAV. Lionel had a great devotion to the Liberty House and donated numerous items and monies helping homeless veterans in the area, as well as helping out at the NH Veterans Home in Tilton.
Master Sergeant LeBlanc won numerous accolades for his devotion to U. S. Veterans throughout the state and nation. In 2010 he was awarded the Maurice L. McQuillen Award from the Union Leader. In 2008 he received a letter of commendation from Governor John Lynch for his tireless devotion to American service men and women in NH. He was given the Key to the City of Manchester on February 19, 2008 from Mayor Frank Guinta. He was on the first Honor Flights to Washington DC and donated his time and money to keep the organization afloat. There wasn’t anything Lionel wouldn't do for a veteran. Master Sergeant Lionel L. LeBlanc will be sorely missed by all who knew him, God Speed.
Calling hours will be on Thursday, February 13, 2020 from 12 pm to 1:30 pm at J. N. Boufford & Sons Funeral Home, 110 Bridge St. A graveside committal service and full military honors will follow at 2 pm in St. Augustin Cemetery following calling hours. In lieu of flowers donations may be made to American Legion Sweeney Post 2, 251 Maple St. Manchester NH 03103.
For more information and online guestbook please visit www.bouffordfuneralhome.com.