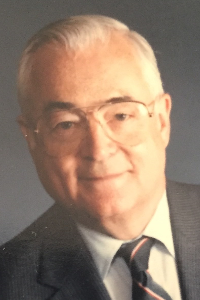 He was a 1945 graduate of Bulkeley High School in Hartford, CT, a 1948 graduate of Providence College, and a 1952 graduate of Jefferson Medical College of Philadelphia. He enlisted in the US Navy and spent the next 3 yrs at Chelsea Naval Hospital in Chelsea, MA, 2nd Marine Division/Fleet Marine Force Camp Lejune, NC and Portsmouth Naval Hospital NH. He received an honorable discharge as Lieutenant(sg) and was a veteran of the Korean War.

He practiced Family Medicine in East Hartford, CT for 3 yrs and then received specialty training in Otolaryngology and Head and Neck Surgery at Boston VA Hospital. He was the first ENT Resident at Beth Israel in Boston. He then returned to St. Francis Hospital on the ENT staff, was Chairman of the ENT Dept. and Chairman of the Medical Council. He moved to Ft Lauderdale, FL and for two years was an ENT surgeon at Holy Cross Hospital. In 1973 he returned to St. Francis Hospital in Hartford and continued his private ENT practice until he retired in 1993. He was also a member of Hartford County Medical Association, CT Medical Society, the American Medical Association and the New England Otolaryngology Association. During his years in West Hartford he was a member of Wampanoag Country Club and Avon Country Club. In 2004 John and his wife moved to Mashpee Mass, and in 2010 moved to his most recent residence at Fuller Village in Milton, MA.
His passions were his family, friends, golf, Red Sox and Patriots.

Visitation will be at St. Pius X Catholic Church, 101 Wolcott Rd, Milton, MA on Thursday February 6 from 9:00am to 10:45, followed by a Mass of Christian Burial at 11:00, and a luncheon in the lower church after mass.

On Friday February 7 there will be visitation at Molloy Funeral Home in West Hartford, CT from 10:30 to 11:30, followed by burial with military honors in the family plot in Fairview Cemetery in West Hartford.

In lieu of flowers, memorial contributions in John’s name may be made to: