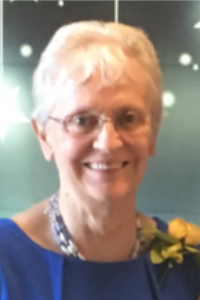 
Marie C. Pollock, 77, of Londonderry, NH, died Tuesday, January 28, 2020 in the Community Hospice House in Merrimack, NH. She was born in Manchester, NH on October 16, 1942, a daughter of the late Joseph and Cecile (Paquin) Rioux, and had been a resident of Derry and Londonderry for many years. Marie had been employed as an office manager for the Masonic Temple in Manchester. She was a member of the Londonderry Senior Center and was a communicant of St. Thomas Aquinas Church in Derry. Marie enjoyed motorcycling and RV-ing with her husband, as well as partaking in any adventures with her grandchildren.

She is survived by her husband Robert Pollock of Londonderry; two sons, Jim Pollock and his wife Pam, and Dan Pollock and his wife Chris; one daughter, Jolene Santoro; her grandchildren, Ashley, Bryanna, Diana, Brian, and Jessica; two brothers, Rolly Rioux, and Ray Rioux; and her sister, Dolores Gile. She was predeceased by her brother, Joe Rioux.

Calling hours were be held on Saturday, February 1st from 1 - 4pm in the Peabody Funeral Homes and Crematorium, 15 Birch St., Derry. Funeral services followed at 4:00pm in the funeral home. Following cremation, she was interred in the Holy Cross Cemetery in Londonderry. In lieu of flowers, memorial contributions may be made to the Community Hospice House, Attn. Development Dept., Home Health and Hospice Care, 7 Executive Park Dr., Merrimack, NH 03054.