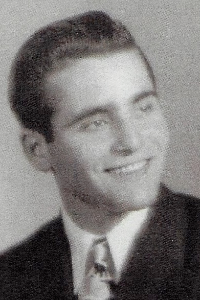 Vincent G. Ferrini, age 86, a lifelong resident of Norton, passed away unexpectedly at Rhode Island Hospital on Saturday, January 25, 2020. He was the beloved husband of Dixie L. (Dodge) Ferrini, to whom he was wed for nearly sixty-eight years.

Born in Ware, MA on February 1, 1933, he was a loving son of the late Vincent and Angelina (Rich) Ferrini.

Vinnie grew up in Norton and was a 1950 graduate of Norton High School, where he excelled in basketball and baseball. To this day, he still holds the Norton High School record of scoring 60 points in a single basketball game. During the Korean War, he proudly served his country as a member of the United States Marine Corps.

His working career was spent as a welder, a trade he learned under the guidance of his father and his uncle Alec Rich.

Mr. Ferrini’s family was the focal point of his life and his passion was playing softball. Throughout the years, he played on numerous softball leagues and finished his career in the Rhode Island Softball League. At the age of sixty, he had the distinction of participating in the Red Sox Fantasy Camp in Fort Myers, Florida.

A communicant of Saint Mary’s Church in Norton, Vinnie was also an avid Red Sox and Celtics fan, a longtime Patriots season ticket holder, and will be sadly missed by his family and friends.

His funeral Mass, to which relatives and friends are cordially invited to attend, will be celebrated on Thursday, January 30th at 11:00 A.M. in Saint Mary’s Church, 1 Power Street, Norton. Burial will follow at the Norton Common Cemetery in Norton.

In lieu of flowers, Vincent’s family has requested that donations in his memory be made to Saint Jude Children’s Research Hospital, 262 Danny Thomas Place, Memphis, TN 38105.