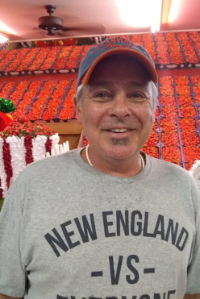 
Jason Ross Farrington, 52, of Abington, MA passed away on January 24th after a short illness.

Born in Abington, son of Charles and Patricia Farrington (both deceased). Beloved father of Kristen and Nicholas Farrington of Braintree. Former husband of Joanne (Perfetti) Farrington. Brother of Christopher (deceased) and Bradford Farrington of Abington. Uncle to Jim Farrington and brother-in-law of Joan Farrington, both of Abington.

He was a graduate of Abington High School, Class of 1989 and attended Merrimack College. He played on the soccer teams for both schools.

Jason was the owner of Farrington Floral Designs at the Merchant’s Row Mall in Hanover for many years.

He was an avid reader, loved fishing with his dad and brother, hiking, camping, and skiing with his family. He also loved the beach and spending time on Cape Cod.

Relatives and friends are invited to attend visiting hours on Tuesday, January 28th from 4 to 8pm at Blanchard Funeral Chapel, Plymouth Street (Rte. 58 @ the rotary circle) in Whitman, MA.