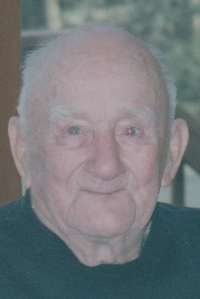 He was born on March 17, 1923 in Dudley, the son of Frank and Anna (Mende) Snyder and lived in Webster most of his life. He graduated from Bartlett High School in 1941.
He was an Army veteran of World War II.

Mr. Snyder first worked at Packard Mills in Dudley. He then was a machinist at George J. Meyers Company in Worcester, retiring in 1985.

He loved hunting and fishing and in his later years creating fishing flies. He enjoyed planting and tending his annual garden.

Services will be held privately at the convenience of the family. Burial with military honors will be in Lakeside Cemetery. Arrangements are under the direction of Scanlon Funeral Service, 38 East Main Street, Webster.