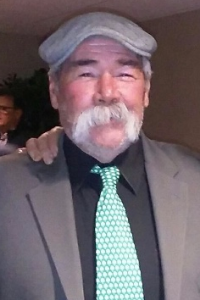 HOGAN David J. Of Roslindale passed away on January 23, 2020. Beloved father of Brenna Gredler and her husband Ben of Quincy, Brendan Hogan and his partner Jennifer MacDonald of Los Angeles, CA., and Kaileigh Hogan of Allston. Former husband of Mary Lou Duff. David was the son of the late Francis and Frances (Brennan) Hogan. Brother of Gail Roberts, Maria O’Sullivan, and the late William Hogan.

David was a truck driver for the Boston Herald for over 30 years. He was a longtime member of the Emerald Society of the Boston Police.

Once you met David, he always made an impression that was not easily forgotten. He volunteered with special needs children in various camps and programs as well as homeless shelters, food pantries, and the Arch Street Shrine. David was an extremely charitable man who loved his family and friends with equal intensity. If you were his friend he made time for you, whatever it was that you needed. He was a legend of a man. In his own humble and charitable way he has touched so many lives and made us smile, laugh, and at times duck. There will never be nor could there be another like him. He was simply that large in life in his own humble way.

Visiting hours at the P.E. Murray - F.J. Higgins, George F. Doherty & Sons Funeral Home 2000 Centre St. West Roxbury on Monday, January 27th from 4-8pm. Funeral from the funeral home on Tuesday at 10:30am, followed by a Funeral Mass at Holy Name Church, West Roxbury at 11:30am. Relatives and friends kindly invited. Interment private. In lieu of flowers donations may be made in David’s memory to Emerald Society of the Boston Police 10 Birch St. Roslindale, MA 02131.