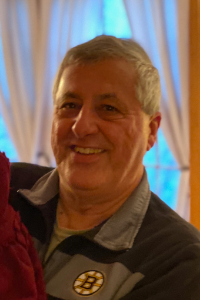 James E. Andrews of Taunton passed away unexpectedly on January 23rd. Beloved husband of Jane (Houlahan) Andrews, loving father to his son Jason, daughter Jessica, daughter-in-law Kailee and his grandchildren Jackson and Abbie Andrews. Son of the late Manuel and Evelyn Andrews of Cambridge, son in-law of Mary Houlahan of Milton and the late John Houlahan, brother of the late Richard Andrews of San Francisco. He is survived by his cousin Mary Lou Sousa of Melrose, his in-laws Ann Houlahan of Taunton, Ellen Parrish of Weymouth, John Houlahan of Kokomo IN, Carol and Jim Cadigan of Taunton, his nieces and nephews Meridith and Andy Piazza of VA, Michael Parrish of Holbrook, Mary and Jamal Spencer of Wellington CO, Taylor Davis of Taunton, John, Maggie, Charlie and Johanna Houlahan of Kokomo IN.

Jim joined The United States Army and served in Vietnam where he became a Purple Heart recipient. After his military service, he began his career with the Department of Public Safety/CJIS where he held several positions in the information systems operations group. After retiring, he became interested in the automobile business and worked for several years at The Mastria Auto Group. He became a volunteer for the Taunton Catholic Schools where his children attended. He volunteered for many years at Marion Manner in Taunton where his mother Evelyn was a resident. He was a longtime member of the Imperio Mariense of Saugus.

Jim was full of energy, full of life and a friend to all who met him. He was an avid New England sports fan. His greatest joy was his family, especially his grandchildren. He loved to cook his famous “American Chopped Suey” for them. He could change a diaper or fix a train better than anyone and he loved to make them laugh. Affectionately known as “the loudest man on earth,” he made us all laugh and will be greatly missed.

Funeral from the O’Keefe-Wade Funeral Home, 70 Washington Street in Taunton on Tuesday, January 28th at 9 AM. A Mass will be held at St Jude the Apostle Church in Taunton at 10 AM. Calling hours will be held on Monday from 4-7 PM. Interment will be held private.

In lieu of flowers please consider making a donation to the charity of your choice.