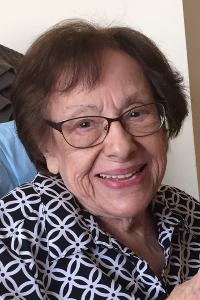 Angela Grisi Groncki, 99, a resident of Franklin, Massachusetts, went home to be with our Lord on Friday, January 24, 2020 at Medway Country Manor, Medway, Massachusetts.

Raised and born in Jersey City, New Jersey on May 8, 1920, she was the daughter of the late Amato and Rosina (Cupo) Grisi. She was the wife of the late Walter Groncki with whom she shared 67 years of marriage.

She resided in Moonachie, New Jersey and New Milford, Connecticut before moving to Franklin, Massachusetts in 2010. She worked for the Town of New Milford for 15 years, retiring in 1983.

Anne is survived by her son, Michael Bruce Groncki and his wife Eileen of Franklin, Massachusetts. She is also survived by two grandchildren: Michael Groncki II and his wife Jennifer, Kathleen "Katie" Cinelli and her husband Todd; five great-grandchildren: Abigail, Hannah and Mikaela Groncki, Rex and Eiley Cinelli; a nephew and nieces: James Grisi and his wife Sunday of New Mexico, Helen Rafferty and Carol Crosby of New Jersey, and Janice Grisi of Pennsylvania; and many grand nieces and nephews. She was predeceased by her brothers Ralph and Joseph Grisi and nephew Ralph Grisi.

A Memorial Mass will take place at St. Mary Catholic Church, One Church Square, Franklin, Massachusetts on Sunday March 29th, at 9AM. There are no calling hours. Anne’s interment will be at a later date at Arlington National Cemetery, Arlington, Virginia in the columbarium niche with her husband.

Arrangements are under the care and direction of the Charles F. Oteri & Son Franklin Funeral Home 33 Cottage St. Franklin. www.oterifuneralhome.com