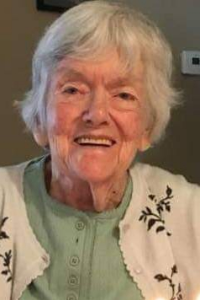 Gladys (Hoisington) Richardson died peacefully in Brookdale South Bay Health Center on January 22, 2020 in Kingstown, RI at the age of 92. She moved to Narragansett, RI, in 2015 to live with her daughter, Barbara Prezioso.

Gladys was born on March 17, 1927 in Derry, NH to Goldie and Carlton Hoisington, the fourth of five children. She graduated from Pinkerton Academy in 1945 where she was Editor of the Pinkerton Academy Critic 1945 and later served as Alumni Class Correspondent for many years. During her high school years, she worked in a shoe factory in Derry, operating machinery normally reserved for men who, at that time, were in short supply due to the war. After high school, she worked as a telephone operator in Derry. She corresponded with a former Pinkerton classmate, Harry Richardson, who was in the Navy. After his discharge from the Navy, Harry proposed to Gladys on the front steps of the telephone office and they were married in September of 1947.

As a homemaker, Gladys took care of her own five children as well as several others whom she babysat, including her niece, Kim Browne Mitzel. She was a skilled seamstress and made lots of her children’s clothes. She also worked part-time as a cook for at Southrange Elementary School and helped her husband with his taxi and later driving school businesses. Always an avid reader, she encouraged her children to read, as well.

In the1980s, Gladys worked with the First Baptist Church women's group to open a food pantry in Derry where donations were collected and bags of food were distributed every Tuesday. She also did volunteer work at the Parkland Medical Center.
After retirement, Gladys and Harry took several cross-country trips by plane, campervan and train to visit children and grandchildren and to see as much as they could of the U.S. They enjoyed trips to the Maine coast and to York Beach. They were married for 52 years until Harry’s death in 1999.

Following cremation, a calling hour will be held on Monday April 6, 2020 from 10 to 11 am in the Peabody Funeral Homes and Crematorium, 15 Birch St., Derry with a memorial service to follow at 11:00 am in the funeral home. Interment will follow at Forest Hill Cemetery, E. Derry, NH.