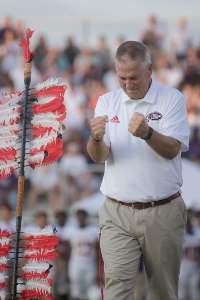 Coach Nobles was born January 26, 1966, in Jacksonville, Florida to Ann Durham Canaday and the late William H. Nobles, Sr. He was a graduate of Temple Christian School in Jacksonville, Florida and attended Andrew College in Cuthbert where he played baseball. He graduated from the University of North Florida with a Bachelor degree in Education. His high school coach gave him his first coaching job at his alma mater, Temple Christian School. Following the closing of that institution, Coach Nobles began his tenure with Coach Robby Pruitt at University Christian in Jacksonville. The pair then moved to Union County High School in Lake Butler, where they won a combined 6 State Championships in the state of Florida, 3 at each school. He was part of a 52-game winning streak where the team was named Small School Team of the Decade. Coach Nobles made his home in Georgia and coached at Fitzgerald High School as well as Coffee County High School before being named head football coach and athletic director for the Irwin County High School. For the past 6 years, Coach Nobles has led the Indians culminating with the State Championship in Region 2, Class A football this past December. He is the winningest coach in Irwin County football history with a record of 67-13-2. Coach Nobles was named the Region 2, Class A Coach of the Year and Athletic Director of the Year for 2019.

Coach Nobles was a member of Arbor Baptist Church where he co-taught the “It’s All About Love” Sunday school class. He had been elected a deacon and was waiting to be ordained. He loved sharing the Word of God with his students, players, and coaches. His impact will be felt for generations and the influence he had on the lives of many people will continue to be his legacy.

The family suggests those desiring to send memorials, may send them to, The Irwin Indian Touchdown Club, P O Box 399, Ocilla, Georgia, 31774.