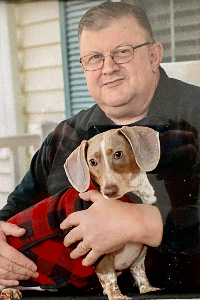 Michael Joseph Kelly, 59, of Londonderry, NH passed away Thursday January 23, 2020 at his residence, after a lengthy illness. Michael was born April 2, 1960 in Everett, MA and was the son of Marjorie (Foley) and the late Joseph Kelly. He was raised and educated in Medford and was a graduate of Medford High School, class of 1979. Michael had been a resident of Londonderry for 30+ years.

Michael had been a chef with the 99 Restaurants for over 25 years at several locations. He was a lifelong and passionate Kansas City Chiefs fan. He also loved poker and card playing of all kinds. Michael enjoyed leather working, as well as many other crafts. He also enjoyed spending time with his two pals, granddaughter Lilyanna and his dog Kolby.

He is survived by his devoted wife of 22 years, Karen (Hoey) Kelly, five children, Stephanie Wills and her husband Ben, Shannon Kelly Cunan and her husband Justin, James Kelly, Janelle Kelly and Shaye Kelly, two sisters, Nancy Kelly and her husband Christopher Lovey, Dolly Griffin and her husband Ernest, 7 grandchildren as well as many nieces, nephews and cousins. Michael was predeceased by his beloved dogs, Buster and Mad dog.

There are no calling hours. After cremation, a celebration of his life and Chiefs fandom was held on Superbowl Sunday, February 2nd at the family residence.