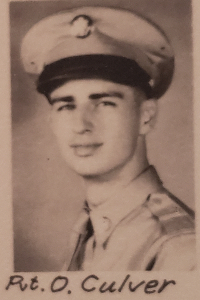 Graveside services with military honors will be held at 2:00 PM on Monday, January 27, 2020 at Hillcrest Memorial Park with Rev. Frankie May officiating.

Mr. Culver served his country proudly with the United States Army. He was an advisor in Vietnam during the war. Mr. Culver also served as a drill sergeant, MP, and retired from hospital command at Fort Gordon. During his career he received several awards and commendations including Marksman (pistol), Sharpshooter and Expert (Carbine), the United Nations Service Medal, the Army of Occupation Medal (Germany), and the Good Conduct Medal.

Mr. Culver is survived by his son, Bruce Culver and numerous friends and extended family members.