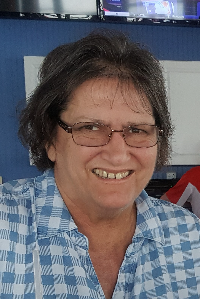 Paula (Girdzus) Palm, 65, of The Villages, Florida, passed away suddenly of a heart attack on Tuesday, January 21, 2020. Paula was in Massachusetts to oversee the burial of her late husband, David Palm, who had just passed away three weeks ago on December 31.

Paula was an accomplished businesswoman, who for many years was a purchasing manager in the garment industry in Massachusetts. She was a graduate of Brockton High School in Brockton, Massachusetts and graduated from Babson College in Wellesley, Massachusetts with a Bachelor of Science in Business.

As Paula was afflicted with Type 1 diabetes for much of her life, she held numerous yard sale fundraisers at her home to support research and a possible cure for this disease.

Paula and her late husband, Dave, moved to the Village of Palmetto Bay in 1986 from Massachusetts, and then relocated five years ago to The Villages in Central Florida.

Paula is survived by David’s two nephews and their wives, Steven (Kerry) Palm, and Wayne (Sharon) Palm. She is also survived by her sister-in-law Jean Palm and grandnephew Cameron Palm. She was also the sister-in-law of the late Richard and Ronald Palm and the great aunt of the late Kacie Palm. She is also survived by her brother Jack Girdzus and her sister Ann Marie Burns, as well as many nieces and nephews. She was predeceased by her sister Ruthe Bigelow, brother James Girdzus, parents John and Florence Girdzus and nephew Jamie Girdzus. Paula and David also left behind countless friends and colleagues from Massachusetts to Palmetto Bay in Miami to the Villages in Central Florida.

Visiting hours will be held on Monday, January 27 at 11:00 AM followed by the funeral service at 12:00 PM in the Blanchard Funeral Chapel, Plymouth Street (Rte. 58 at the rotary) Whitman. Burial will follow at 2:30 PM, where she will be buried beside her husband David, at the Massachusetts National Cemetery in Bourne, Massachusetts.

In lieu of flowers, please make donations to the Juvenile Diabetes Research Foundation (JDRF) in her memory.