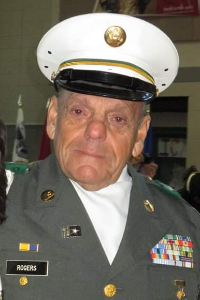 William Rogers, Jr., 83, of New Bedford died January 18, 2020 unexpectedly at home.
He was the husband of Arlene A. (Moniz) Rogers.
Born in New Bedford, son of the late William and Justina (Carmos) Rogers, he lived in New Bedford all of his life.
He was formerly employed by the City of New Bedford for many years until his retirement.
Mr. Rogers served in the U.S. Army during the Korean War and later served many years in the National Guard retiring as a staff sergeant.
He enjoyed collecting antiques especially antique cars, radios and jukeboxes. He also enjoyed the company of his dogs.
Survivors include his wife; 2 daughters, Susan Rogers and Sharon Lally, both of New Bedford; a son, Dennis Rogers and his wife Susan of New Bedford; a brother, Daniel Rogers of New Bedford; 5 grandchildren, Robert, Kristie, Shaystin, Alexandra and Denny Ray; 2 great-grandchildren, Savannah and Marc, Jr.; and several nieces and nephews.
He was the father of the late Douglas Rogers, the former husband of the late Rosalind Rogers and the brother of the late Etheline Antunes and Herbert Rogers.
His Funeral Service will be held on Friday, January 24th at 11 AM in the Saunders-Dwyer Home for Funerals, 495 Park St., New Bedford. His family will receive guests on Friday from 10:30 - 11 AM prior to his service. Burial will follow in St. John's Cemetery. In lieu of flowers, remembrances may be made to the TLC Veterinary Hospital 896 Hathaway Rd., New Bedford, MA 02740.