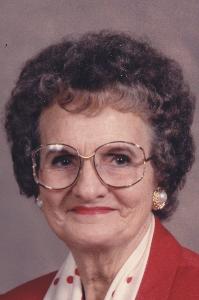 
Eunice Zimmer, 97, passed away peacefully on Friday at Miller's Merry Manor in Chesterfield, IN surrounded by her loving family.
Eunice was the daughter of Garrett Richards and Lucy Owens, born in Meldrum, KY. She moved to the Anderson area in 1942, where she worked for Guide Lamp for 31 years until her retirement in 1973. During her 70+ years in Chesterfield, Eunice was a founding member of the Kingston Ave. Baptist Church, where "Miss Eunie" taught several generations of preschoolers in her Mission Friends class on Wednesday evenings, and where she planted and maintained three large flowers beds. The church voted "Miss Eunie" Senior of the Year in 1996.
Eunice was an avid bowler, participating in numerous local leagues over the years, including the Guide Lamp Ladies League.
She and her husband Harold "Pappy" Zimmer were active CB'ers in the Madison County REACT for many years, where they were voted Reactors of the Year in 1986.
Eunice was a passionate and lifelong gardener. Her yard was source of pride and brought such joy to the whole town. Her flowers were truly a thing of beauty.
Anyone who knew Eunice also knew that she loved animals. She was an enthusiastic bird watcher, and every stray in town knew exactly where to come for a free meal.
She was undoubtedly the world's best pie-maker. Family and friends from near and far will attest to this fact. In addition to her exquisite pies, Eunice learned from her mother to make fried chicken that can only be described as "otherworldly" and that no Colonel could match ...
Aside from these many accomplishments, Eunice's great joy in life were her grandchildren, whom she loved with a passion that only a grandmother could know, and her grandchildren loved her fiercely in return.
She will be forever remembered and is survived by her daughter Shari and husband Dave Folsom, who she loved like a son, grandson Shawn Harmon (wife Stacy Howe) of Gorham, ME, grandson Jeremy Harmon (wife Shelly Scott-Harmon) of Bloomington, IN, granddaughter Courtney Harmon (husband Josh Pelley) of Seattle, WA, great grandchildren Sigrid Harmon, Aidan Scott-Harmon, and Campbell Scott-Harmon, sister Lydia Riley, and numerous nieces and nephews. Eunice is preceded in death by her husband Harold Zimmer, brothers John, Bill, Frank, and Charles Richards, and sisters Mildred Riley, Christeen Richards, Janice Hall, and Juanita Payne.
Eunice's family would like to thank the staff at Miller's Merry Manor, some of whom became family, for their loving care of her in her final years.
In lieu of flowers, please make donations to the Alzheimer's Association, the Chesterfield Food Pantry, or the Animal Protection League of Anderson.
Funeral services will be 2 p.m. on Friday, January 24, 2020 at Rozelle-Johnson Funeral Service with Ned Clark of Chesterfield Christian Church officiating.
Burial will follow at Bronnenberg Cemetery.
Visitation will be one hour prior to the service Friday.
Post online condolences at www.rozelle-johnson.com