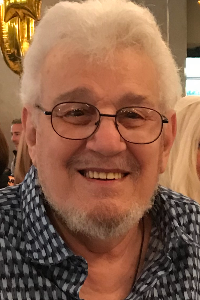 Roland LaPorte, 77, of Pawtucket, formerly from Greenville, passed away Wednesday, January 15, 2020 at the HopeHealth Hulitar Hospice Center in Providence, surrounded by his loving family. He was the beloved husband of 36 years to Carol (Proulx) LaPorte.

Born in Central Falls, he was the son of the late Albert and Lillian (Archambault) LaPorte from Cumberland. He resided in Pawtucket for the past year, previously living in Greenville for 36 years.

Mr. LaPorte was a self-employed long-distance truck driver prior to being the owner/proprietor of the Convenience Plus convenience store located in Johnston. Both he and his wife cherished the family-owned community store and knew most of their customers by name. He retired 16 years ago and spent his time doing what he loved best, enjoying time with his family and grandchildren!

He enjoyed auto racing, antique cars, boxing, baseball, and he was also an avid lover and collector of Hotwheels. Mr. LaPorte was inducted into the Model Car Hall of Fame in 2012 along with fellow inductees, Jay Leno, Mario Andretti, Kyle Petty, and Kenny Bernstein.

Besides his wife, he leaves his daughters, Lisa LaPorte and Lori Constable; his sons, John LaPorte and Michael Pay; his brothers, Louis LaPorte, Jerry LaPorte, twin Ronald LaPorte, and the late Albert LaPorte. He was also the husband of the late Dawn LaPorte and father to their late son, Scotty LaPorte. Mr. LaPorte also leaves behind his biggest fans, his eight grandchildren Kurtis, Sydney, Devin, Sarah, J.J., Cassie, Ellie, and Chris.

Relatives and friends are kindly invited to join in Roland’s Life Celebration which will be held on Wednesday , February 12, 2020 from 4 pm to 7 pm in the Anderson-Winfield Funeral Home, Rt. 44 at Greenville Common, Greenville. A memorial service will be held at 5:30pm. In lieu of flowers, donations may be made in his memory to the Make-A-Wish Foundation at: www.massri.wish.org