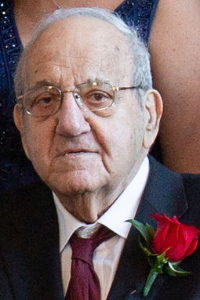 Joseph D. Parillo, “Chuckie”, of Somerville died peacefully surrounded by his loving family at the Sawtelle Hospice House on Tuesday, January 14. Born in East Boston, he was the son of the late Dominic and Jennie (Verderico) Parillo. Chuckie was a longtime resident of Somerville, Massachusetts, where he first met his sweetheart, Pauline, who lived across the street. The two were married for over 62 years.

He was a veteran of the US Navy, serving from 1951-1955. He spent many weekends at the dog track, fishing on the Cape, driving to Foxwoods or Atlantic City with his loving wife, and taking trips to visit his brother in New York. Throughout his life he enjoyed tinkering with household appliances and his car, continuing to work on his VCRs up until his passing. His most cherished past time, however, was going for a long car ride with his sweetheart on a Sunday afternoon.

His funeral will be from the Dello Russo Funeral Home, 306 Main St., MEDFORD, Tuesday, January 21, at 9 AM, followed by a funeral Mass celebrated in St. Clement Church, 71 Warner Street, Medford, at 10AM. Relatives and friends are respectfully invited to attend. Visiting hours Monday, from 4-8PM. Services will conclude with burial at Woodlawn Cemetery, Everett.

In lieu of flowers, contributions in his name can be made to the Myasthenia Gravis Foundation of America, 355 Lexington Avenue, 15th floor, New York, New York 10017.