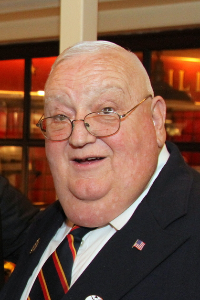 Robert I. "Gugga" Flynn, a lifelong resident of Charlestown, entered into eternal life suddenly at his home in Charlestown on Thursday, January 16, 2020. He was 68 years of age.

Gugga was born in Boston on January 19, 1951, a son of the late James F. Flynn and Elizabeth (MacKillop) Flynn. He grew up in Charlestown where he was educated at St. Francis De Sales Parochial School and graduated from Boston English High School in 1969. Gugga worked in a Managerial position with the M.B.T.A. for 23 years before his retirement. He then began working also in a Managerial position for the Massachusetts Water Resource Authority for 10 years and then became Facilities Manager for The Boston Public Library for several years. Gugga was a member and Sergeant of The Ancient and Honorable Artillery Company of Massachusetts for many years and was a member and Past President of The Old Charlestown Schoolboys Association, Bunker Hill Council # 62, Knights of Columbus, The Cronin Club and The Suffolk County Deputy Sheriffs Association. Gugga was a proud Townie and a faithful parishioner and usher of St. Francis De Sales Parish in Charlestown. Gugga was always known for his fondness of a good cigar.

Relatives and friends are invited to attend Gugga's Funeral on Wednesday, January 22, 2020 at 10 A.M. from The Carr Funeral Home, 220 Bunker Hill St. Charlestown followed by his Funeral Mass in St. Francis De Sales Church, 313 Bunker Hill St. Charlestown at 11 A.M. His burial will be at Woodlawn Cemetery in Everett. His visiting hours will be on Tuesday, January 21, 2020 from 4 to 8 P.M. in the funeral home.