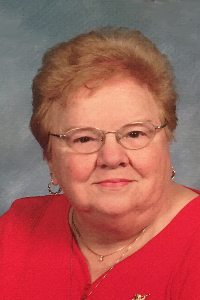 ..retired from Lucent Technology; 90
TEWKSBURY – M. Theresa (Beaudoin) Zaremba, age 90, the proud mother of five, died peacefully at Bear Mountain of Lowell, formerly Wingate Belvidere, Tuesday evening, January 14, after years of declining health. She was the beloved wife of Stanley A. Zaremba, who died in Florida in February 2000.
She was born in Lawrence, a daughter of the late Stanislaus and Rose (Caron) Beaudoin, and raised in Andover. She graduated from Punchard High School in Andover. After her marriage, she remained in Andover where she raised her family. Upon retirement, she and her husband moved to Venice Florida, where she lived until 2015, returning to Tewksbury for her family support in her “golden years.”
In addition to raising her family, she worked for Western Electric, which became AT & T, and finally Lucent Technology, from where she retired in 1990.
As a resident of Andover, she was a faithful communicant of St. Augustine’s Church, where she sang in the Church Choir each Sunday.
In her lifetime, she enjoyed golf, bowling, and knitting, but family time was her most important interest.
She leaves her children; Stephan A. Zaremba, and his wife Sharon (O’Neill) of Tewksbury, with whom she resided for the past four years, Cindy McGregor of Sandown, NH, Robert A. Zaremba and his wife Dawn (Court) of Hudson, NH, Christopher Zaremba of Ipswich, Lynn Gagnon and her husband John of Atkinson, NH; ten grandchildren; twelve great grandchildren; brother-in-law Steve Zaremba of Methuen; sister-in-law, Anne Kvaraitis of FL; many nieces and nephews; and was predeceased by her siblings, Runa Perrault, Rita Lafontaine, Charles Beaudoin, Stanley Beaudoin, and Irene Mimno.
Memorial visiting hours Sunday, January 19, from 1:00 until 3:00 p.m. in the Tewksbury Funeral Home, corner of 1 Dewey and 975 Main Sts. (Rte. 38) TEWKSBURY CENTER, Ph. (800 in MA or 978) 851 2950. Memorial prayers will follow at 3:00 p.m. in the funeral home. Private burial will be in Spring Grove Cemetery in Andover. In lieu of flowers, memorials to the American Heart Assn. of N.E., P.O. Box 417005, Boston, MA 02241-7005 or www.heart.org or M.A.S.P.C.A. Nevin’s Farm, 400 Broadway, Methuen, MA 01844 or visit www.mspca.org The Tewksbury Funeral Home is honored to serve the Zaremba family. visit: tewksburyfuneralhome.com