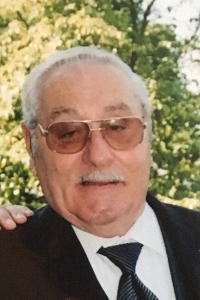 Albert “Al” Paliotta, 85, died peacefully Wednesday December 25, 2019 in Port Orange, Florida. Al was the loving husband of the late Agnes A. (Cerullo) Paliotta of Glocester, Rhode Island.
Albert was born in Providence, Rhode Island, the son of the late Giuseppe Paliotta and Concetta (Mariorenzi) Paliotta. Al was a resident of Rhode Island for over eighty years before permanently relocating to Port Orange, Florida in 2017. He attended high school in Providence, Rhode Island before serving in the United States Army Corp of Engineers in the mid-1950s.
Al went on to work extensively in Southern New England in the glass and aluminum industry as a draftsman and later a project manager. He was employed by Karas and Karas Glass Company Inc. of Boston, Massachusetts for many years before retiring from the industry in 1987 due to health issues. Al was active in several civic organizations during his many years as a Glocester resident. Albert was extremely proud of his beautiful family and enjoyed spending quality time with them whenever possible. Al enjoyed entertaining friends and family at his “Safari Acres” property on Sandy Brook Road and loved his time spent in the great outdoors. He was an avid gardener, a classic country music enthusiast, and an amateur guitarist. Al enjoyed traveling in his RV and often remarked that he was “On the Road Again” as he would depart for his next destination. Albert would go on to spend twenty five years traveling by RV between Rhode Island and Florida, before finally settling down in Port Orange.
Al is survived by his children, Steven Paliotta and wife Cindy of Newtown, Connecticut; Gail Dahlquist and husband Andrew of Chepachet, Rhode Island; Michael Paliotta and wife Heather of Richmond, Rhode Island; and Linda Fanning and husband Scott of Burrillville, Rhode Island. Albert was predeceased by his son James “Jimmy” Paliotta. He is survived by his brother Joseph V. Paliotta and wife Jane of Westerly, Rhode Island. Al leaves his grandchildren Jeremy, Amanda, Nicole, Patti, Brittni, Katlynn, Stephanie, Samantha, Corey and Casey; in addition to his great-grandchildren Andrew, Emma, Isabella, Parker and Jayden.
A funeral service to which relatives and friends are invited will be held Thursday, January 23rd at 11am in the Anderson-Winfield Funeral Home, Rt 44 at Greenville Common, Greenville. Visitation will be from 10am to 11am. Burial will be private.